NetEnt published this slot game in October 2019, and the symbols represent Rudolph and Santa.

With an RTP of 96.35%, additional free spins, and bonus features like random wilds, this slot machine offers more chances to win than Christmas presents.

Our Santa vs Rudolf slot review examines this game, which, like Christmas, has a charming and enchanted feel that will take players back to their younger years.

With a variety of betting options along the bottom of the screen, NetEnt makes setting up and playing Santa Vs. Rudolf simple.

Players can adjust their win and loss limits and stake per spin using this option.

Also, users may spin the reels using the manual spin button or the automated spins preset after establishing these conditions.

Players must line up symbols across all pay lines to win, starting from the left. Graphics and graphics use fantastic colours and contrasts in a straightforward but powerful cartoon style.

Day fades into the night when you begin the Free Spins round, and Santa explodes in wrath as he demands his hat back.

The game’s symbols are also appropriately suited for a holiday. The special symbols are cartoon drawings of snow globes, sleighs, and letters to Santa, while the standard symbols are candy cane letters.

The Wild, a picture of Rudolph sticking his tongue out to jeer Santa, is the primary symbol that gamers should be on the lookout for.

The song is a ridiculous yet enjoyable and cheery holiday jingle.

Candy canes in the shapes of a 10, J, Q, K, and A are the lesser-paying symbols.

A letter to Santa Claus, a snow globe with a reindeer inside, Rudolf’s collar, Santa’s sack full of presents, and Santa’s sleigh are among the symbols with larger payouts.

Rudolph, who is arrogant, and Santa, who is irate, are the wild scatters. Gamers can start the free spins round by combining these.

There are 20 fixed paylines on Santa vs Rudolf that pay both ways. The premium symbols are the traditional Christmas traits, as one may anticipate.

Santa’s sleigh is the symbol with the most outstanding payout. The payout for a 5-of-a-kind hand is 25x the wager, but it is 50x the wager because winners are split evenly.

You win 500 times your wager if you can fill a screen with either wilds or Santa’s sleighs. Also, you can win a maximum of 10,000 times your bet if you accomplish this 20 times during the bonus spins.

Due to the abundance of extra features in Santa vs Rudolf, players who enjoy pokies machines with many features will adore this new NetEnt product.

Since they cause respins in thispokie, the wilds significantly impact the game.

Each of Santa and Rudolph’s wild symbols can walk across the reels one symbol at a time during a respin when they show up on the fifth and first reels, respectively.

Naturally, they’ll also assist in completing any paylines that arise, giving them a useful little symbol to search for.

There are numerous options to increase your chances of winning in this game, including respins and free spins.

However, the round will end once it crosses all of them and leaves them, and no other wilds have appeared.

The Santa vs Rudolf free spins without a deposit starts when both the Santa and Rudolf symbols appear on the reels and collide.

After that, you’ll receive ten free spins, which you may retrigger up to 30 times during Santa vs Rudolf.

Two meters, one for Santa and one for Rudolf, each with eight parts, are located to the side of the reels.

You will add one to each character’s meter whenever you see one of their wild versions. The bonus game for that character will start when all of the meters are filled:

Rudolf Spins: Three rounds with five arbitrary reindeer wilds that could appear anywhere on the reels.

Santa’s Gifts: A pick-and-click feature that offers multiplier boosts or coin wins. The feature is over when you select the “end of stage” option. 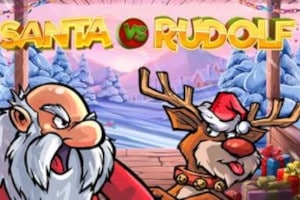