Gong Gaming Technologies released this slot machine game in October 2022, and it has become well-known among gamers for its captivating engine and outstanding visuals.

Our Witch Feature slot reviews guide players on the basics of the game, in which they can receive several modifiers, wilds, scatters, and free spins.

This action-packed game is playable on all popular desktop and mobile platforms.

Hence, players can quickly form a winning combination on the go when three or more identical symbols appear on consecutive reels within the game’s paylines. Witch Feature is a slot machine with a witch theme that will be ideal for gamers throughout Halloween. Similarly, the graphics are excellent, and the general layout is pleasing.

The four lowest-paying symbols include a few irrelevant card suit emblems. However, there are also ones with owls, books, cats, brooms, and a witch.

The setting of the game is a mystical realm. One can suppose that they are at a witch’s lair or any other place similar because they hardly see what is happening in the backdrop.

The symbols with lower payouts are clubs, diamonds, hearts, and spades. Consequently, a complete line of five pays 0.8x–1x the wager with one of these.

Furthermore, players choose a minimum stake of €0.50 and a maximum bet of €80. Therefore, the bet range is acceptable to most individuals.

The higher-paying icons, which include an owl, broom, cat, book, and witch, are a little more thematic. A complete line of 5 pays out 1.6x–6x the wager with one of these.

The wild symbol can replace all other paying symbols. A purple staff serves as the scatter symbol; players need two to start the bonus round.

This symbol can pay up to 20 times the initial wager and replaces all other winning symbols to create more winning combinations.

The wild can occur on any reel and can be used to complete winning combinations in place of pay symbols.

The features of potions are highlighted in the game. They are activated by gathering particular potion jars, with various combinations starting with multiple traits.

Only the scatter symbol can appear on the first and fifth reels. Furthermore, getting two of them will start the free spins.

The scatter symbol must appear on reels 1 and 5 to start the free spins.

However, the scatter symbols need to appear on reels 1 and 5 to start the spins again indefinitely. 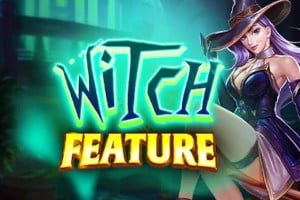