The Ultra Burst pokies is the latest game to be released by Red Rake Gaming in 2022.

The game is a 5×3 reel pokies with five paylines and an RTP of 95.4%, but with its ultra burst feature, cascading reels and burst multipliers, you stand a chance of a 1200x maximum win on your bet.

Keep on reading this Ultra Burst review to discover more about the game. This pokies has a navy-blue colour screen which provides a relaxing atmosphere for your spins.

The various colourful symbols contrast nicely with the background.

The assortment of fruity symbols gives fun and nostalgia, adding the Ultra Burst pokies to a long line of other fruity pokies.

The background becomes crimson red when you trigger the Ultra Burst feature.

Moreover, you can hear more upbeat music and the blaring voice of “A big win.”

All these add to the excitement of playing in the bonus round.

Ultra Burst is a relatively easy game to start playing. However, you will first need to decide how much to bet for each spin.

The game allows you to bet a minimum of €0.10 up to a maximum of €75 per spin. Beginners can start playing this pokies with as little as 10 cents per spin.

After fixing the betting amount, you can proceed to spin the reel or use the auto spin button to expedite the process.

In this game, your goal is to hit as many paylines as possible in the base game. Nonetheless, the holy grail of Ultra Burst is to get at least one Ultra Burst wild symbol in reels 2, 3 or 4.

After that, the game transforms, and you can play the bonus round with some exciting features to boost your winnings.

1. Spin button: Starts the game by spinning the reels

3. Bet size button: Set the amount to bet on each spin by increasing or decreasing the level

5. Sound: Allow or mute the sound

7. Pay table: Provide details on winning combinations and prizes for each symbol.

Now that you know how the game works, it’s time to learn how to get that big win on your spins.

On this reel, you will find a range of fruity symbols like grapes, melon, lemon and strawberry.

Moreover, there are other staple symbols like the lucky number 7, bell, gold bars and diamond.

The highest paying symbol is the diamond, which gives you 40x if you manage to get 5 symbols on a payline.

The lowest paying symbol is the grapes with 9x for 5 in a row.

The Ultra Burst wild symbol is the coveted symbol as it replaces all other symbols.

A win that includes at least one Ultra Burst wild symbol in the second, third or fourth reel will launch the Ultra Burst feature.

Moreover, in this game, you have the chance to win as much as 1200x by betting small amounts of money.

If you have a win, including an Ultra Burst wild symbol in reels 2, 3 or 4, you will step into the bonus round of the game.

The pokies game has three intriguing features in the bonus round. We will go through each of them below.

As soon as you land on an Ultra Burst wild symbol, the game launches the Ultra Burst feature.

The base game changes from a mere 5 paylines to 243 paylines when this feature is triggered.

Each additional win in this round will result in a re-spin.

This keeps going until you stop winning or reach the maximum multiplier of 5.

During the Ultra Burst feature, you will also enter the cascading reels mode. In this mode, all symbols from the previous winning combination are replaced by new ones.

Hence, you have more chances to add to your winnings.

Every time you earn the Ultra Burst feature, the burst multiplier on the right bar increases from 0 up to a maximum of 5.

However, this feature resets to zero when you leave the bonus round. 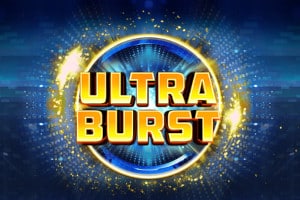