Join the lobster pirate deep beneath the sea in the Reef Raider online slot. Developed by NetEent, it features a 7-reel, 7-row grid along with cluster pays.

The slot uses Avalanche mechanics with plenty of extra features. Moreover, it includes two types of wild symbols and multipliers to boost your chances of winning.

This article provides a detailed review of the slot including payouts and bonus features.

To fire up the reels, set your bet amount on the lower bar and click on the spin button at the centre of the screen. Winning lines are formed by landing 5 or more adjacent symbols that shape as a cluster.

The treasure trail can also be activated, and it is the centre stage in the game.

Here are some of the buttons and their functions:

Symbols on the reels consist of 4 low-pay shell symbols and 4 high-pay gem symbols. The highest paying symbol is the red jewel that can reward up to 150x the stake.

This is only possible if you land 25 or more cluster matching symbols. As stated earlier, the slot has two different wilds symbols represented by the clam and coin.

If you land a winning cluster that has 3 or more matching symbols, one empty position is filled with the clam wild. This happens before the next avalanche.

The other wild symbol, coin wild, land both in the base game and free spin mode if random wilds or the cannon blast feature is activated.

The adventure under the sea bubbles up with extra features to increase your chances of landing a winning cluster.

The avalanche feature is triggered when a winning cluster is created on the reels. Winning symbols on the reels are blasted off to create space for new ones to replace them.

The process continues as long as a new winning cluster is formed on the reels. With each avalanche, the Treasure Trail meter is charged, and it can bring other amazing features.

Multiplier symbols are activated if they land vertically or horizontally to the winning cluster symbols.

Payouts from these multipliers are shown on the symbols. Available multipliers have different worths and these are 2x, 3x, 5x, and 50x.

Landing more than one multiplier symbol awards a new multiplier which is the product of the two.

As mentioned, the Treasure Trail feature is triggered if the meter is charged to the max. The Treasure trail meter is made up of 15 stages.

Landing 3 successive wins activate this bonus feature. Below are the rewards depending on the activated bonus feature:

Free spins are triggered by charging the Treasure Trail meter to the max. Nine free spins are awarded and 2 are added if you land 3 or more charged bars.

During the free spin mode, the Mystery overlay feature is active. The mystery overlay symbol transforms into matching symbols for each spin to assist in creating clusters.

NetEnt chose a pirate theme with simple cartoonish visuals and design for the Reef Raider slot.

The background is set at the bottom of the sea with aquatic plants and swimming in the background.

Overall the design is clear and colourful which is what every player needs.

The soundtrack is made of jolly music with the crabs roaming on the ocean floor.

The technology used supports both desktop and mobile devices. 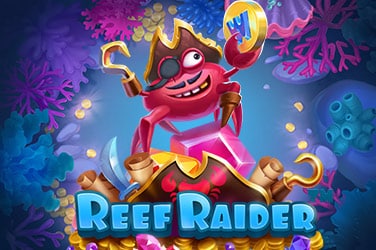